Status, 10 May 2016: I have not updated this package for many years, but José María Miotto has recently made some improvements to it. José's version is available on github.

PyLevy is a Python package for working with Levy alpha-stable distributions. PyLevy can:

Caveat: PyLevy will not calculate alpha-stable distributions with alpha less than 0.5. 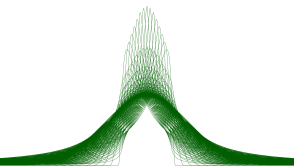 I wrote this package as a tool to help investigate my theory of autism. However Levy stable distributions may be expected to crop up in all sorts of places. Anywhere you currently use Gaussian statistics or least-squares modelling you should consider using this robust family of distributions instead.

Alpha is the tail thickness parameter -- the tails fall off as x -(alpha+1) [1]. This can range from 0.0 to 2.0, but PyLevy can only calculate distributions in the range 0.5 to 2.0. Alpha=2.0 is the Gaussian distribution. Alpha=1.0 is the Cauchy distribution. In general, the higher the alpha value the thinner the tails of the distribution.

[1] With the exception of alpha=2.0, where they fall off as e -x2. Also, for alpha close to 2.0 this tail behaviour only manifests far out along the distribution.

Ideally PyLevy would provide error bounds and significance estimates. It does not currently do this. For estimating significance I would suggest some form of numerical simulation, e.g. using PyLevy's random number generator.

PyLevy requires numpy and scipy. PyLevy is distributed under the GPL.

If for some bizarre reason you are still using Numeric, try this version: