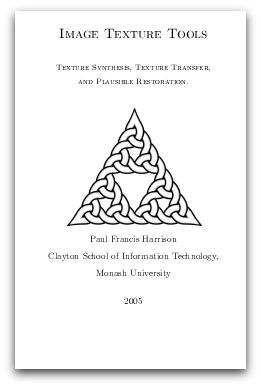 Three image texture operations are identified: synthesis of texture from a sample, transfer of texture from one image to another, and plausible restoration of incomplete or noisy images. As human visual perception is sensitive to details of texture, producing convincing results for these operations can be hard. This dissertation presents several new methods for performing these operations. With regard to texture synthesis, this dissertation presents a variation on the best-fit method [Efros and Leung, 1999, Garber, 1981] that eliminates the "skew" and "garbage" effects this method sometimes produces. It is also fast, flexible, and simple to implement, making it a highly practical method. Also presented is a simple and fast technique based on random collage. Both of these techniques can be adapted to transfer texture from one image to another. Next, a noise removal method that is guided by a model of an image's texture, in the form of a non-linear predictor, is presented. The method is applied to plausibly restoring the texture of images degraded by compression techniques such as palettization (e.g. GIF), and to the removal of Gaussian noise, with results comparable to state-of-the-art wavelet-based methods. Finally, a more abstract form of texture synthesis is examined, based on the arrangement of tiles of specified shape. This is used to show the origins of the artifacts seen in best-fit synthesis.

In this technical report, a simple and fast method is described for the synthesis of texture from a sample. This method produces results comparable to those of more sophisticated methods. The basic principle employed is to piece together patches of a sample into a larger output texture. These patches are chosen at random, and have random shape. A method to disguise the edges of the patches is described. The texture synthesis method is applied to still images and video. Its application to texture transfer is also described.